MISI’s critical infrastructure model city, that we have named DreamValley, includes a critical defense manufacturing sector. Rumors abound that DreamValley’s cyber nemesis, DreadRiver, is planning an imminent attack on the city’s manufacturers. DreamValley needs to verify the cybersecurity posture of this sector quickly and without disruption to manufacturing lines. DreamValley wants to leverage advances in artificial intelligence to understand the vulnerability of multiple manufacturers’ business networks with limited time and network traffic to minimize disruption to normal business activities. This type of rapid vulnerability assessment will also provide DreamValley and other manufacturers with cyber resilience and compliance situational awareness needed to accelerate compliance with a number of cybersecurity standards including Department of Defense cybersecurity standards and others.

In this rapid prototyping event, we are challenging participants to develop techniques for rapid, automated penetration testing. Developments in artificial intelligence (AI) algorithms, particularly in reinforcement learning, can enable exploitation decision-making at computer, rather than human, speed. We have $25,000 (USD) in prizes to give away to the best performers as determined by us!

We suggest leveraging existing capabilities for AI-driven penetration testing such as DeepExploit, MetasploitGym, or AutoPentest-DRL; however, participants are free to use whatever solution they wish. Individuals or teams are invited to compete.

Each competitor will be given remote, administrative access to their own Kali Linux virtual machine (VM) from which to launch their solution. Competitors must demonstrate a capability to automatically discover the (virtualized) network assets and to then exploit those vulnerable assets. Vulnerabilities can range from weak passwords to unpatched operating systems to unpatched services. Competitors will be judged based on:

For this event, we are not interested in enumerating all of the vulnerabilities for each host. The focus here is on completeness of access, time taken to gain that access, and to lesser extent, the amount of network traffic generated to gain that access. Degrading or modifying hosts beyond proving access is not permitted.

We have chosen the following schedule of events:

Note that participants are welcome to attend the Q&A session virtually or in person at the DreamPort facility in Columbia, MD. The event itself will also allow hybrid participation, and will involve three scheduled, non-overlapping time slots for each participant (see below). The schedule will be determined after registration closes and will be driven by the number of participants.

After the Q&A session:

The event will consist of three competition rounds, each of which simulates a penetration test against a different DreamValley manufacturer. Competition rounds will feature increasing complexity in terms of size, networking, and vulnerabilities. Depending on the number of registered participants, the number of participants advancing from one round to the next MAY be limited.

Each participant will have an assigned time slot within each competition round. Between time slots, the target network will be reset to ensure a level playing field. At the beginning of each time slot, that participant’s Kali VM will be connected to the target network via a second Ethernet adapter. All penetration testing MUST be performed on that adapter only. Each competitor must announce completion of their penetration test via their Discord channel. At that time – or when their time slot has ended, whichever comes first – that Kali VM will be disconnected from the target network.

The notional network diagram below illustrates the concept that will be used. More specifics will be available closer to the event, but the intent is for advanced competition rounds to include multiple IP subnets (possibly with a requirement to pivot through an already-compromised host) and up to 50 vulnerable machines. This diagram depicts the off-limits centralized logging infrastructure as “Blue – SOC (OFF LIMITS)”. 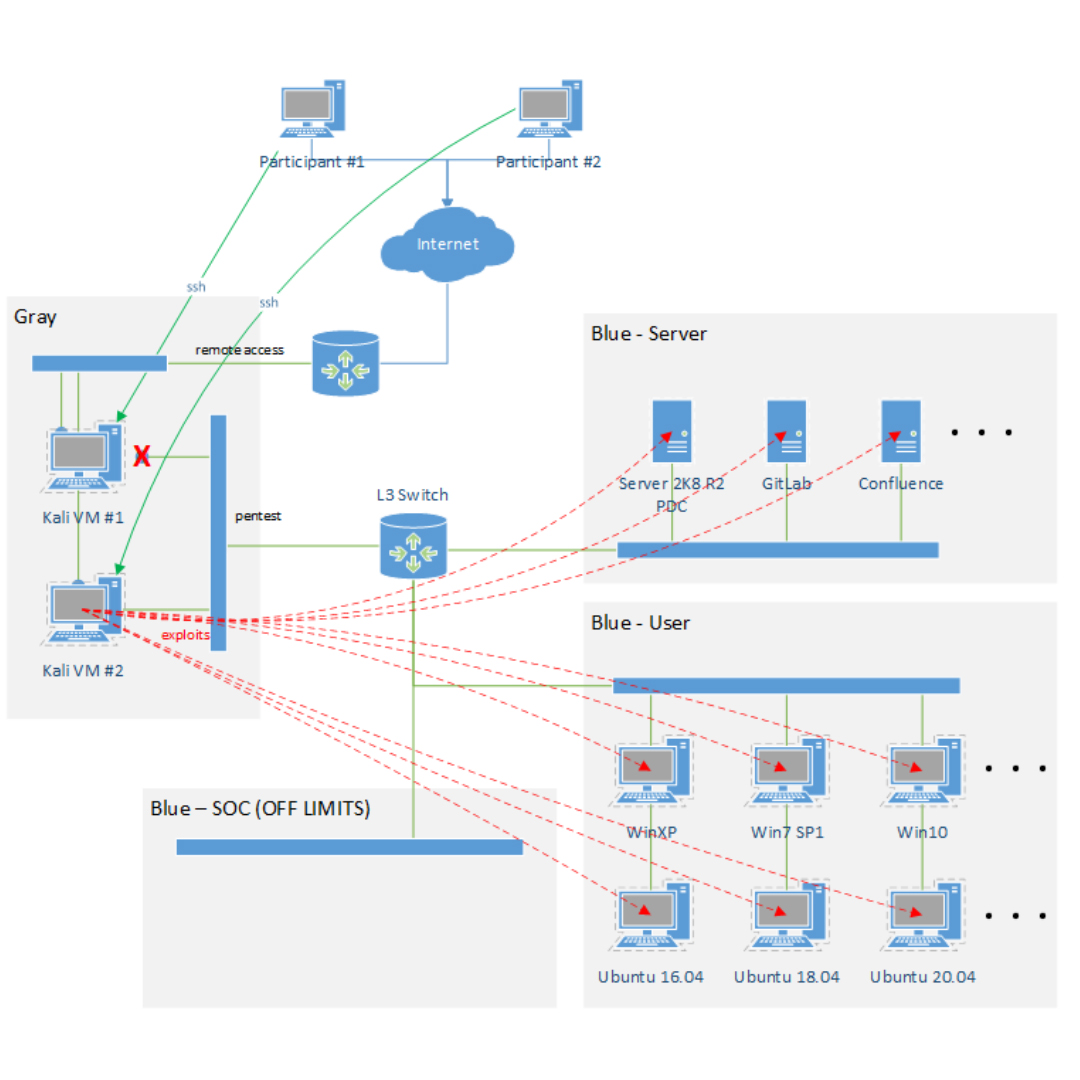 Note that all target machines will be configured for centralized logging and alerting, and all network traffic will be captured. This data will be leveraged for participant evaluations and may also be leveraged for future events. As this is a penetration test designed to avoid disruption of normal operation, actions such as tampering with logging or denial of service (DoS) attacks are cause for disqualification.

Participants will be evaluated based on:

The evaluation period will follow the event itself. Participants will be notified of the results as soon as possible.

We recommend the following skills for RPE participants:

DreamPort will award $25,000 in cash prizes to the best participants, as determined by MISI based on post-event evaluation.